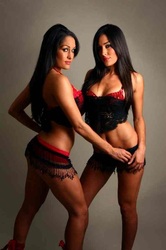 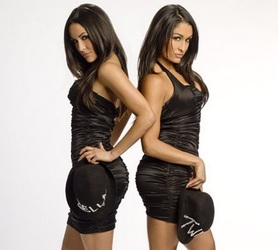 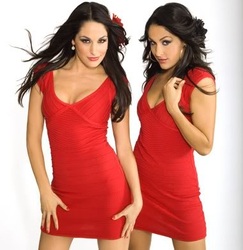 Born sixteen minutes apart to parents Kathy Colace and Jon Garcia, Brianna and Nicole Garcia-Colace were raised in Scottsdale, Arizona, and are of Mexican and Italian descent. Keen soccer fans, they both played for Scottsdale clubs from second grade. In third grade, the girls were separated into different classes by their mother to allow for more independence. The twins graduated from Chaparral High School in 2002. They both moved to San Diego, California for college, but moved to Los Angeles a year later, where they worked as waitresses at the Mondrian Hotel while trying to find an agent.

They then started modeling, acting, and doing promotional work. They made their first national TV appearance on the Fox reality show Meet My Folks. Following this appearance, the Garcia twins were hired to be the World Cup Twins for Budweiser and were photographed holding the World Cup trophy. They were contestants in the 2006 "International Body Doubles twins search". They participated in the 2006 WWE Diva Search but did not make the cut.

They were signed to developmental contracts by World Wrestling Entertainment (WWE) in June 2007 and assigned to Florida Championship Wrestling (FCW), WWE's developmental territory, in Tampa, Florida. On September 15, 2007 the twins debuted in FCW, dubbed The Bella Twins, by defeating Nattie Neidhart and Krissy Vaine with Victoria Crawford as the special guest referee. The duo quickly started a scripted rivalry with Neidhart and Crawford, and had a series of matches against them throughout October 2007. As a part of their on-screen personas, they switched places behind the referee's back if one of them was hurt. They also occasionally competed in mixed tag team matches, teaming with male wrestlers including Kofi Kingston and Robert Anthony. They also made some non-wrestling appearances on Heath Miller's "Happy Hour" promo segment.

Starting in December 2007, they managed Derrick Linkin, but this storyline was cut short when Linkin was released in January 2008. They then resumed their feud with Neidhart and Crawford, wrestling them throughout much of 2008. After Neidhart was called up to the WWE roster in April 2008, however, Milena Roucka took her place in the feud. They also competed in bikini contests, and wrestled against other competitors including Katie Lea Burchill and Daisy. Their last FCW appearance was on September 2, when they competed in a Divas Battle Royal won by Miss Angela.

Brand switches (2008–2011)
On the August 29, 2008 episode of SmackDown, Brianna debuted as Brie Bella and defeated Victoria. She quickly began a scripted rivalry with Victoria and Victoria's accomplice, Nattie Neidhart, who was now using the ring name Natalya, and had a series of matches against them. In each match Brie would roll out of the ring and go underneath it, emerging and appearing revived, and then win the match. On the October 31 episode when Brie went under the ring Victoria grabbed her legs, but a second pair of legs kicked her off, implying that a second person was under the ring. The following week on SmackDown, Brie picked up a win against Victoria and then ran under the ring to escape Natalya and Victoria, but Victoria and Natalya both reached for Brie under the ring, resulting in both Nicole and Brie being pulled out. The twins then attacked them and celebrated afterward. Nicole was then introduced as Nikki. The twins had their first official match as a team on the November 21 episode of SmackDown, defeating Victoria and Natalya. They continued competing in tag team matches for the next few months.

Two dark-haired Caucasian female identical twins are standing in a wrestling ring with red ropes, facing in opposite directions. They are both wearing dresses in the fashion of 'Santa Claus', although one is red and one is green.
The Bella Twins in a Santa's Little Helper match in December 2009.
Starting in November, they developed an on-screen relationship with The Colóns (Carlito and Primo), appearing in numerous backstage segments with them, and accompanying them to the ring. In February 2009, the storyline expanded to include John Morrison and The Miz, who flirted with the Bellas and took them on a date on Valentine's Day. The date provoked a rivalry between the teams of The Miz and Morrison and Primo and Carlito, with the four competing for the affection of The Bella Twins, who were seemingly unable to choose between them. On March 17, on ECW, Carlito and Primo, aiming for Morrison and The Miz, accidentally spat apples in the face of Brie. Nikki started to laugh at Brie's misfortune, and a fight broke out between the two of them, which led to Nikki leaving with The Miz and Morrison, while Brie stayed with Primo and Carlito. Brie won her first match over Nikki in a six-person intergender tag team match on SmackDown the following week. On ECW on March 31, Nikki pinned Brie in their first singles match against each other, after a distraction from Morrison and The Miz.

On April 15, 2009, The Bella Twins were both drafted to the Raw brand as part of the 2009 Supplemental Draft. On April 27, Brie made her Raw in-ring debut in an eight-Diva tag team match, which her team won. Nikki also made an appearance, reuniting with her twin, as she was under the ring to help out Brie during her match. Nikki then made her official in-ring debut for the brand the following month, in a battle royal but was eliminated by Beth Phoenix.

Identical female twins with long black hair are both walking towards the, one slightly in front of the other. The one in front is wearing a patterned, pastel colored crop top with black trousers, and is wearing her hair loose. The one behind is wearing a blue dress and has her hair tied back. Both are wearing sunglasses.
The Bella Twins arriving at the arena before a show
On June 29, 2009, they were both traded to the ECW brand. They debuted on ECW the following night on The Abraham Washington Show, as the special guests. They quickly developed a storyline feud with Katie Lea Burchill, when Nikki defeated her in a match by switching places with Brie behind the referee's back. The following week on WWE Superstars Brie defeated Burchill after a similar switch, and the feud ended in September, when Nikki defeated Burchill on Superstars.

On October 12, the Bellas were sent back to Raw as part of a tri-branded divas trade, where they predominately appeared in backstage segments with the weekly guest stars and only occasionally competed in matches. On the January 4, 2010, episode of Raw, Brie participated in a tournament for the vacant WWE Divas Championship, but lost to Maryse in the first round, when a switch resulted in Nikki being pinned. In June 2010, they developed a feud with Jillian Hall, when Brie defeated her after switching places with Nikki. The following week, Nikki defeated Hall after switching with Brie. The feud was exacerbated when the Bellas acted as the special guest referees during one of Hall's matches. During the match, Hall attacked both twins, but lost the match when Nikki made a fast count, allowing her to be pinned by Gail Kim. The next week on Superstars, the twins defeated Hall and Maryse in a tag team match to complete the storyline.

On August 31, The Bella Twins announced they would be part of season three of NXT, mentoring Jamie. Jamie was the first rookie eliminated on the October 5 episode of NXT. In November, the twins began a storyline with Daniel Bryan, when Brie accompanied him to the ring for his match. Following his win, Nikki ran out and the two fought over Bryan's affection, until Bryan broke it up and had them hug each other. They began to manage Bryan and frequently accompanied him to the ring over the next two months. In January 2011, both Bellas turned into villainous characters when they discovered Bryan kissing Gail Kim backstage and then assaulted Kim. They continued to attack Kim, both at the Royal Rumble and on Raw, and on February 7, they teamed with Melina in a losing effort to Kim, Eve Torres, and Tamina.

The twins spent the majority of the rest of the year in tag team matches, regularly facing Kelly and Torres. The Bellas began to show friction for the second time since joining WWE in March 2012 after both lost to AJ in singles competition. After Brie's match with AJ, Nikki revealed that Brie was rooting for Team Johnny in the 12-man tag team match at WrestleMania XXVIII, whilst Nikki was rooting for Team Teddy, thus furthering their dissension.

Independent circuit (2012–2013)
On May 1, 2012, the twins appeared at their first independent wrestling show in Newburgh, New York at Northeast Wrestling. They later appeared for CTWE Pro Wrestling at the Season Beatings pay-per-view on December 15, each accompanying a different wrestler to the ring.

Upon the debut of the Total Divas reality television program in July 2013, the Bellas began feuding with their co-star on the show, Natalya. Brie and Natalya went on to trade victories in singles competition on Raw and at SummerSlam. The cast of Total Divas then transitioned into a scripted feud with WWE Divas Champion AJ Lee, who mocked the show and cast. At Night of Champions, Brie unsuccessfully faced Lee for the Divas Championship in a four-way match also involving Natalya and Naomi. Following Brie's real-life engagement to Daniel Bryan, their relationship began to be acknowledged on WWE television. Continuing their feud into October, Brie and AJ faced off at the WWE Battleground and Hell in a Cell pay-per-views for the WWE Divas Championship, but Brie was unsuccessful. Nikki returned to in-ring action on the October 25 episode of SmackDown, losing to AJ. At Survivor Series the following month, the twins were part of the victorious Team Total Divas. The twins failed to win the Divas Championship again at WrestleMania XXX in the Divas Invitational match, which was won by AJ.


From the crowd, Brie watches Nikki, who is about to participate in a four-on-one handicap match.
In April 2014, Brie became involved in her husband Daniel Bryan's ongoing storyline with Stephanie McMahon and Kane. As part of the storyline, McMahon threatened to fire Brie if, an injured, Bryan did not relinquish the WWE World Heavyweight Championship, which forced Brie to quit before slapping McMahon in the face. After Brie quit, McMahon put Nikki in several handicap matches as punishment. Brie returned to WWE television, appearing in the crowd on July 21; following a confrontation, McMahon slapped Brie and was subsequently arrested. In order to have Brie drop the storyline charges, Brie was rehired and received a match against McMahon at SummerSlam. At SummerSlam, Brie lost to McMahon when Nikki attacked Brie. The next several weeks saw the sisters fight in several backstage and in-ring segments, including a cameo appearance from Jerry Springer on Raw on September 8. As part of the storyline, McMahon declared Nikki the face of the Divas division and granted her a match at Night of Champions for the WWE Divas Championship, but she failed to win. Nikki then obtained permission to begin forcing Brie to compete in handicap matches, similar to her punishment at the hand of McMahon; Brie was able to defeat Eva Marie and Cameron on Raw on September 29 and the Slayers (Layla and Summer Rae) on Main Event that same week. This led to a match between the two at Hell in a Cell, which Nikki won, forcing Brie to act as her personal assistant for thirty days. The following week, Nikki won a Halloween costume battle royal to become the number one contender for the WWE Divas Championship.

Nikki received her title match against AJ at Survivor Series, which she won, with Brie's help, to become a two-time Divas Champion. The duo reconciled at this point, with Brie refusing to explain her reasons for doing so. In December, at TLC: Tables, Ladders and Chairs, Nikki retained the championship against AJ in a rematch and successfully defended the title against Paige at Fastlane in February 2015.