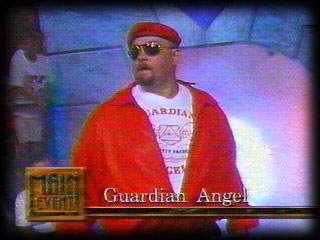 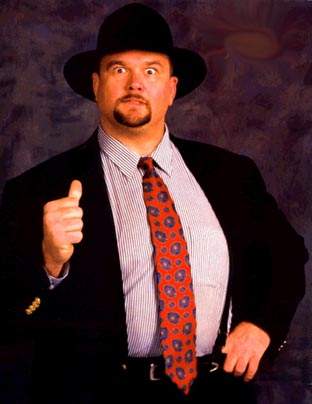 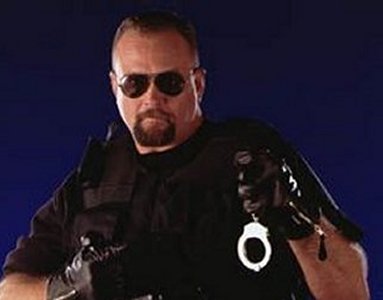 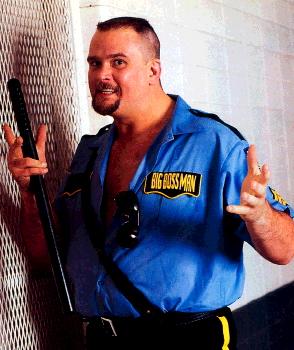 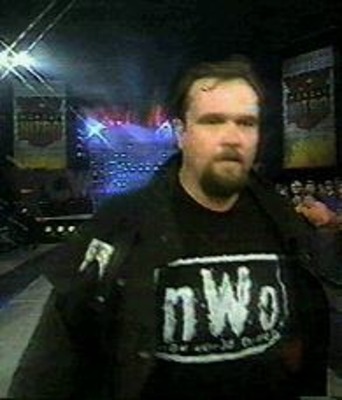 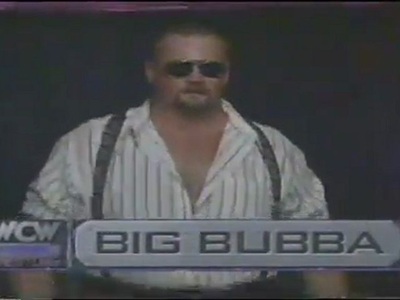 Jim Crockett Promotions (1986-1987)
Traylor, a former prison guard in Cobb County, Georgia, debuted in 1986, initially working as a jobber for Jim Crockett Promotions, under his real name. Seeing his potential, head booker Dusty Rhodes pulled Traylor from TV for 12 weeks, in order to repackage him as "Big Bubba Rogers", a silent bodyguard for Jim Cornette, who, along with the Midnight Express, was feuding with The James Boys (Dusty Rhodes and Magnum T.A., under masks). He got a solid push as a seemingly unstoppable heel and feuded with Rhodes (the top face at the time) in a series of Bunkhouse Stampede matches in 1986. He and Rhodes were tied for wins in this series, leading to a tiebreaking cage match, which Rhodes won.

World Wrestling Federation (1988–1993)
In June 1988, Traylor joined the WWF as "Big Boss Man", a prison guard character. Wrestling as a heel and managed by Slick, Boss Man's post-match routine often included handcuffing his defeated opponents (mainly jobbers) to the ring rope and beating them with a nightstick or ball and chain.

After defeating Koko B. Ware at the inaugural SummerSlam, Boss Man began his first major WWF angle by attacking Hulk Hogan on "The Brother Love Show". During this feud, he also challenged Randy Savage for the WWF Championship, and formed a team with Akeem (formerly billed as One Man Gang, his UWF opponent) to form The Twin Towers. They feuded with Hogan and Savage (who had formed The Mega Powers), and were a key part in the top storyline of Savage turning on Hogan, leading to the WrestleMania V main event; in the later part of a tag match between the four on Saturday Night's Main Event, Savage abandoned Hogan and went backstage. After being double-teamed for a while, Hogan eventually rallied and defeated The Twin Towers on his own.

At WrestleMania V, The Twin Towers defeated The Rockers and then, for most of spring and early summer 1989, feuded with Demolition over the Tag Team Championship. Meanwhile, Boss Man concluded his feud with Hogan in a series of steel cage matches; one of the most memorable aired on the May 27 Saturday Night's Main Event, where Hogan superplexed Boss Man off the top of the cage.

Boss Man became a fan favorite after he refused to do the bidding of his villainous manager Slick (left).
The Big Boss Man became a face in early 1990. Ted DiBiase had paid Slick to have Boss Man retrieve the Million Dollar Championship belt from Jake Roberts', who had stolen it. Boss Man retrieved a bag containing both the belt and Roberts' pet python, Damien. On The Brother Love Show, he refused to accept DiBiase's money for the bag, and returned it to Roberts.

Boss Man then feuded with former partner Akeem, defeating him in less than two minutes at WrestleMania VI. As part of his face turn, he stopped handcuffing and beating jobbers after matches. He made peace with Hogan, appearing in his corner in his match against Earthquake at Summerslam '90, and teaming with him at the 1990 Survivor Series, along with "Hacksaw" Jim Duggan and Tugboat, to defeat Earthquake's team.

In the fall of 1990, Boss Man began feuding with Bobby Heenan and The Heenan Family after Heenan continually insulted Boss Man's mother. He won a series of matches against Heenan Family members, including The Barbarian at the Royal Rumble and Mr. Perfect (via disqualification) at WrestleMania VII in an Intercontinental Championship match, which featured the return of André the Giant. At the 1991 SummerSlam, he defeated The Mountie in a Jailhouse Match, a match in which the loser must spend a night in jail. This was the only such match ever held by the promotion. Boss Man then briefly feuded with Irwin R. Schyster.

In 1992, Boss Man began feuding with Nailz, an ex-convict character who, in a series of promos aired before his debut, claimed Boss Man had been his abusive guard in prison, and warned he was seeking revenge. On the May 30 episode of WWF Superstars, Nailz — clad in an orange prison jumpsuit — ran into the ring and attacked Boss Man, handcuffing him to the top rope and repeatedly choking and beating him with the nightstick. Boss Man took time off TV to sell his "injuries", eventually recovering and having a series of matches with Nailz in the latter half of 1992. The feud culminated at Survivor Series, when Boss Man defeated Nailz in a Nightstick on a Pole match.

The Big Boss Man's last pay-per-view match of this run came at the 1993 Royal Rumble, where he lost to Bam Bam Bigelow. He left the WWF shortly after a house show in Gatineau, Quebec on March 14.

All Japan Pro Wrestling (1993)
Traylor had a brief stint in All Japan Pro Wrestling in 1993 as "Big Bubba", a name he had used in his previous tour with the promotion, the 1988 Champion Carnival. Here, he mainly worked tag matches, often with Stan Hansen, Kendall Windham or "Dr. Death" Steve Williams, but also defeated Mighty Inoue, Johnny Smith and Tamon Honda in singles matches.

World Championship Wrestling (1993–1998)
Traylor returned to the United States to debut for World Championship Wrestling, as "The Boss", on the December 18, 1993 episode of WCW Saturday Night, pinning the International World Champion, Rick Rude, in a non-title match. A face, he received a title match against Rude at Starrcade '93: 10th Anniversary, but lost. In light of legal complaints from the WWF regarding the similarity of "The Boss" to "Big Boss Man", Traylor was renamed "The Guardian Angel", and wore similar attire to those in the organization he was named after. He feuded with Big Van Vader for most of 1994. In early 1995, he turned heel, and became again known as "Big Bubba Rogers". He defeated Sting at Uncensored in March 1995.

In 1996, Rogers joined The Dungeon of Doom. By the end of the year, he had turned on the group and joined the nWo. His stay in the nWo was brief, as J.J. Dillon forced him out of the group, due to a contract technicality. He then disappeared briefly before returning later in 1997, managed by Ted DiBiase, who had recently quit as the financier of the nWo. For the first time since 1985, Traylor wrestled under his real name. He feuded with the nWo, defeating members such as Scott Hall, Curt Hennig, and Vincent. He formed an alliance with The Steiner Brothers, who also sought DiBiase as their manager. The union abruptly ended when Scott Steiner turned on them to join the nWo in February 1998. After losing his final WCW match to Bill Goldberg on the March 30 episode of Nitro, Traylor was released.

Big Boss Man on SmackDown! in 1999.
Traylor rejoined the WWF shortly after his WCW release and once again became "Big Boss Man". On October 12, 1998, he returned to television with a new look, abandoning his blue police shirt for an all-black SWAT-style uniform, including a bulletproof vest and gloves. He served as Vince McMahon's bodyguard during his feud with Stone Cold Steve Austin and his later feud with D-Generation X. He briefly wore a mask, before his identity was revealed.

Boss Man was one of the first members of McMahon's heel stable, The Corporation, and served as a bodyguard for other members, such as Vince's son Shane. While in The Corporation, Boss Man won the Tag Team Championship with Ken Shamrock, won the Hardcore Championship four times, and lost to The Undertaker at WrestleMania XV in a Hell in a Cell match. After this match, The Undertaker hanged him from the roof of the cage (an illusion made possible by a body harness concealed under Traylor's outfit).

In the WWF's Hardcore division, Boss Man's major feud was with Al Snow, a feud that eventually involved Snow's pet chihuahua, Pepper. At SummerSlam, the two had a Falls Count Anywhere match that spilled into the backstage area, the street and, finally, into a nearby bar. Just prior to the match, Snow had set Pepper's pet carrier near the entranceway. Minutes into the match, Boss Man picked it up, taunted Pepper, struck Snow with the carrier and carelessly tossed it behind him. Commentator Jim Ross immediately apologized to viewers for the act, and stated that Pepper had been removed from the box before the match.

Two weeks later, Boss Man kidnapped and ransomed Pepper, arranging a meeting in which he fed Snow a meat dish supposedly made from Pepper's remains. The two settled their feud in a Kennel from Hell match at Unforgiven, in which a blue solid steel cage surrounded the ring, itself and ringside surrounded by the chain-link fenced "cell". The object of the match was to escape from the cage and the cell while avoiding "attack dogs" (which turned out to be disappointingly docile) positioned outside the ring. Snow won the match and retained the Hardcore title, which had been returned to him by Davey Boy Smith, who had defeated Boss Man for it. Boss Man would later win back the Hardcore title in a triple threat match involving Al Snow and Hardcore Holly, and would hold it until January 2000, when he lost it to Test.

Boss Man then feuded with The Big Show over the WWF Championship. During the feud, Boss Man showed up at Big Show's father's funeral, made some disrespectful remarks, then chained the casket to the back of his car and drove off. The Big Show attempted to save the coffin by jumping on it, riding it for a few yards before losing his grip and tumbling off. Boss Man became the #1 contender for the WWF Championship by defeating The Rock on the November 15, 1999 episode of Raw. At Armageddon, The Big Show defeated him to retain the title and end the feud.

Boss Man entered the 2000 Royal Rumble match, where he eliminated Rikishi (with the help of five other wrestlers), Chyna and Faarooq, before being eliminated by The Rock.

On the March 19 episode of Sunday Night Heat, he introduced Bull Buchanan as his protégé. They teamed to defeat The Godfather and D'Lo Brown at WrestleMania 2000, and the Acolytes Protection Agency the next month at Backlash. On the June 5 Raw is War, after losing to The Hardy Boyz and subsequently arguing, Boss Man knocked Buchanan out with his nightstick when his back was turned and the team split up.

In the summer of 2000, Boss Man disappeared from the WWF's primary television shows, wrestling mainly on Jakked and Heat, where had a minor feud with Crash Holly until suffering a legit injury in January 2001. When he returned late 2001, he formed a team with Booker T, after Vince McMahon ordered him to be Booker's enforcer. The team quietly split in late January 2002, and Boss Man returned to Jakked and Heat. In April, he formed a short-lived tag team with Mr. Perfect after both were drafted to the Raw brand. On the May 20, 2002 Heat taping, he lost his final WWE match to Tommy Dreamer.

Traylor was assigned to train developmental wrestlers in Ohio Valley Wrestling, before being released from WWE in 2003.