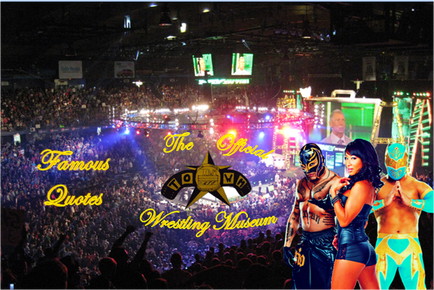 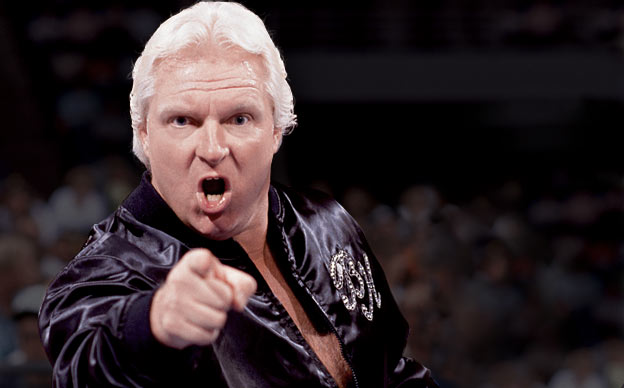 "What happened there? My monitor went out."

Gorilla: "Brain, if you keep quiet, no one will know  how stupid you are."
Bobby: "You're kidding."

Heenan: " That's either the flock or the who's who of  skid row."
Schiavone: " Maybe both."
(After saying something smart)
"Do you think this brain thing is a gimmick?"

"If you ever had your moon salted you'd know how painful that could be."
(after Juventud Guerrera took off his mask)

"Now when he delivers pizza,  everyone will know who he is."

(Talking about the Narcissist Lex Luger's elbow)
"He's had more hits than Elvis."

"You know what slows down Typhoon?
Twinkies--Hostess  Cupcakes."


(Talking about Typhoon)
"He uses his weight advantage at dinner."

"Doink is like Jell-o: there is always room for more."

(When Bob Backlund is entering the arena)
"At 234  pounds, from Mayberry, Opie Taylor."

"North Dakota State. What do you have to do there to  graduate? Milk a cow with your left hand?

Jim Ross: "Hey everybody can't be born with  a silver spoon in their mouth and have a chauffeur named Jennifer, who  told me  she hasn't had a raise in several months."
Bobby Heenan: "She said  that?"
Ross: "Yes"
Heenan: "She's fired. I'll unload her  like I found her. Do you need a job on the weekends?"
Ross: "I'm a  little busy on the  weekend"
Heenan: "Oh that's right, you just drive  pickup trucks."

"Stu Hart trained all his kids--only three of them  use the litter box."

(Talking about the Guerrero family)
"Their  family  is watching this at home wondering if the wheels are going to get stolen off  their house.

(Chris Benoit was wrestling a fake midget Rey Mysterio, Jr.)
"I know who that is. It is the chihuahua from the Taco Bell commercials."

Terry Schiavone: "I smell Jackhammer. I smell Hogan."
Bobby Heenan: "Anyone close to him does."

Heenan: "You call them Luchadores?"
Tenay:  "Luchadores."
Heenan: "That sounds like the tight pants that you wear at a bullfight."

(Talking about Chavo Guerrero)
"He's the only guy  I know that has a stable of stick horses."

"You know you put too many lemons in your lemonade  when you pucker too much."

Tony Schiavone: "Scott Hall is looking a little better this week."
Bobby Heenan: "It's only Monday."

"There's another way to look at this: there are 153  Villanos wrestling."

(Talking about Chris Jericho)
Lee Marshall: "He is an ego maniac."
Bobby Heenan: "But he's good at it!"

(Talking about Raven)
Bobby Heenan:  "I  wonder what his childhood was like: was he from wealthy parents, was he
neglected, or was he spoiled?
Tony Schiavone: "Who cares?"
Heenan: "I do!"

Bobby Heenan: "Some nights the Villanos sit around the fire with popcorn and their masks on."
Tony Schiavone: "I  hate you!"

(Talking about Alex Wright)
"His mother told me  when he was eight months old he sat up in his crib and said 'Headlock.'"

(Talking about Koko B. Ware)
"The job is only half  done. If they want to shrink his head, they already shrunk his haircut."

(Talking about Yokozuna on the day before Thanksgiving)
"505 pounds and maybe more after tomorrow."

"There is good news and bad news about Rey's shirt,  The bad news is the shirt don't fit him, the good news is all the luchadores are  moving in"

"There trying to say he just put the figure three on  him self."

"If it wasn't for Mrs. Gurrero's chili they wouldn't  have invented Rolaids."

Bobby Heenan: "That's not the first time he's been on the ground holding his stomach."
Tony Schiavone:  "Huh?"
Bobby Heenan: "Obviously you've never had any of Mrs. Gurrero's chili."

"If you were smart you could have made a Duralog out  of Pepe."

(crack at the Bushwhackers)
"The city of New York  could legally condemn them."

(Talking about Jim Niedhart)
"Now he's the sane  one of the team?"

(Jim Niedhart looks into the camera and laughs)
"I  think his headband is on too tight on the Anvil's head. I see I'm right."

Tony Schiavone "I'm sure a liar has to make  a living like everyone else."
Bobby Heenan "That's why we're here."

(Talking about Ralphus's dress)
"Obviously some  cheap motel is missing a shower curtain."

"How could you not turn your attention to Ralphus;  he's quite the looker."

(Talking about Chavo Guerrero, Jr.)
"He's never  been the same since he lost Mr. Ed."

Bobby Heenan: "And don't forget Mickey
Jay.  He's a second generation, too."
Tony Schiavone: "Who's his father?"
Bobby Heenan: "He's not a wrestling referee. He ref'ed a pee-wee football league back in the '40's."

(Talking about Rey Mysterio, Jr. before he unmasks)
"I think he's ugly. What do you guys think?"

(After Rey Mysterio, Jr. unmasks)
"It's Leave it  to Beaver!"

"You should just get beat up for having a last name  Whipneck."

(Talking about Mikey Whipwreck)
"Do you think that  when Mikey was a kid, was he his parents' little whipper-snapper?"

"Tony, it looks like your room at the Motel 3."

(Talking about Will Sasso from Mad TV)
"We're watching the illegitimate child of Alfred E. Neuman out there."

(Talking about Will Sasso's outfit)
"Do you know  what the number 73 means? That's the number of double cheeseburgers he had
from  4 - 5."

"I smell a title change, or is it you Tony?"

Mike Tenay: "He's got Roman numerals on his trunks."
Bobby Heenan: "His numerals shouldn't be roamin'."

Mike Tenay: "What took us so long to come to  Chapel Hill?"
Bobby Heenan: "We couldn't find it."

(Talking about Tony Schiavone)
"Next week I'll be  on the Cartoon Network with pictures of your last date."

(Talking about Jim Duggan)
"He's has a disadvantage when he wakes up."

"What good is shaking your hands? If you want to shake something, put your hands together and wrap them around your opponent's head."

"I remembered when Tony came to WCW. He took the mask  off and his career skyrocketed."

"You spend nine years in a hardcore punk band--ofcourse you'd be deaf."

Mike Tenay: "Just who is the leader of the  nWo?"
Bobby Heenan: "I'm not sure, but I wouldn't be surprised if Tony Danza comes out."

(During a hardcore match)
"These two move more furniture than Mayflower."

Tony Schiavone: "Don't try this in your backyard."
Bobby Heenan: "Do it in your living room, it is much more  fun. Or maybe in Tony's living room, he'll never know."

"What has Saturn got on? Mudflaps?"

(Booker T makes his own count for the win)
"That  wouldn't work. You gotta have a guy dressed like a zebra for that."

"Just the other day I was talking to Cal Ripken, Jr.  and he asked me 'Do they pay Tony?' "

"And for those of you that dropped out of high school, remember the famous phrase: 'Do you want fries with that?' "

(Talking about Hulk Hogan and pyrotechnics)
"At  least he doesn't have to worry about his hair catching on fire."

"You don't need a vacuum cleaner out here: he's cleaning house himself."


(If Kidman lost the hair vs. mask match)
"What a great new tag team: The Okerlunds"

(Referring to the First Family, who were wearing masks, at Halloween Havoc)
"Jimmy Hart told me they would be wearing masks to  the ring. I'm wondering why aren't they."

Tony Schiavone: "I never even knew Evan Karagias was here."
Bobby Heenan: "I never know where he is and don't care."

"Is everyone from Texas nuts, or are we just lucky to  see the ones we do?"

Tony Schiavone: "Pardon me."
Bobby  Heenan: "I'm not the governor."

Gorilla Monsoon: "He might have some relatives  here.  He's looking around."
Bobby Heenan: "He's looking for the exit:  the quick way out."

Gorilla Monsoon: "The Texas Tornado could sustain permanent brain damage if it's kept on for much longer."
Bobby Heenan: "Then again it could increase his IQ by 9 points.  That would make an even 10."

Gorilla Monsoon: "The corner of the steps hit  him in the trapezius."
Bobby Heenan: "That's what they use in  the circus."

(Referring to Tony Schiavone)
"That's "The Brain"  right there. -And that's the other part of the anatomy"