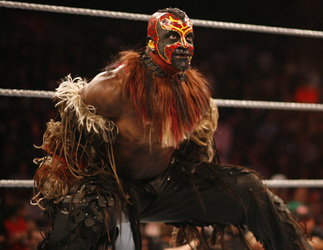 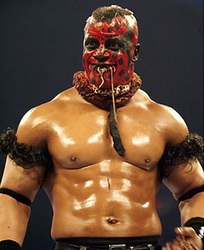 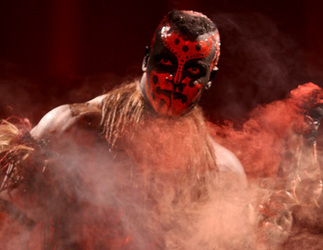 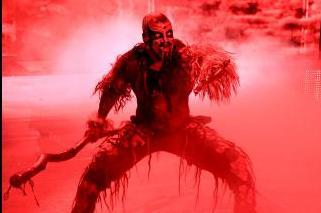 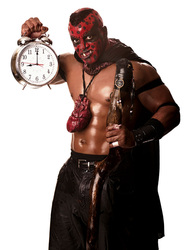 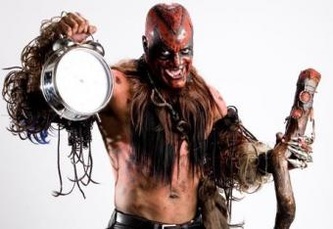 Wright first entered the world of professional wrestling to take part in the fourth season of the World Wrestling Entertainment (WWE) produced reality television competition Tough Enough. On October 15, 2004, he attended the two-day event in Venice Beach, California, where he was among eight finalists chosen. After surviving the first day of eliminations he admitted that he was actually 40 years old — five years over the competition's cut off point — and not 30 as he'd claimed. As a result he was cut from the competition.

Though he had been cut from Tough Enough, WWE officials invited him to come to their developmental territory Ohio Valley Wrestling (OVW) for possible training. He trained between January and June 2005, making his OVW debut on June 25, 2005. During a dark match pitting the team of Seth Skyfire and Robert Fury against Robbie Dawber and his partner, Wright entered the ring and squashed all three men, no-selling the offense of Skyfire in the process. He then announced that he was "The Boogeyman" before leaving the building. The Boogeyman gimmick further evolved into a "monster" face who would appear when another wrestler said his name and attack him, while not selling any offense he received.

SmackDown (2005–2007)
On the July 11, 2005 episode of WWE Raw, horror movie style vignettes began airing to promote the debut of Wright in his "Boogeyman" personality. After a few weeks the vignettes were moved from Raw to SmackDown!, but his planned debut was delayed when he hyperextended both knees and needed time to recover. The Boogeyman made his first appearance on the October 13, 2005 SmackDown!. He was brought in by UPN Network Executive Palmer Cannon, who claimed he was going to be a part of another (unspecified) UPN show that never came to be due to an on-set "accident" involving The Boogeyman; it was implied he had "done something" to another member of the cast, but this was never elaborated on. Cannon said he brought him to the SmackDown! brand as part of a "new talent initiative". The Boogeyman then proceeded to recite a version of the child's chant One, two, Freddy's coming for you from the movie A Nightmare on Elm Street before smashing an oversized alarm clock on his own head. The Boogeyman continued to "terrorize" other Superstars for the next couple of months. For the next few weeks The Boogeyman (who was then a tweener) appeared in unexpected places backstage (closets, vans, et cetera), reciting different nursery rhymes and holding up clocks before screaming his catchphrase "I'm The Boogeyman and I'm comin' to get'cha!" and laughing maniacally. This would leave the performer(s) that had discovered him both confused and creeped out, usually ending with them backing out of the room slowly while the commentators remarked on how strange the whole situation was.

At the 2005 Survivor Series, The Boogeyman helped SmackDown! General Manager Theodore Long defeat his Raw counterpart, Eric Bischoff. He made his official in-ring SmackDown! debut on December 2, defeating Simon Dean in a squash that saw him repeatedly scream, "I'm the Boogeyman!" at a confused and terrified Dean. During this match, he took a handful of live worms from his pocket and stuffed them into his mouth as commentators Michael Cole and Tazz screamed in disgust. For the next few weeks, The Boogeyman won numerous squash matches that focused on the antics of The Boogeyman. Opponents were generally "flattened" in the ring, left with worms in their mouths and/or spit on their faces. His official pay-per-view debut was at December's Armageddon when he came to the ring to confront Vito and Nunzio who were dressed as Santa Claus and an elf.

Boogeyman's first major feud occurred with JBL and his "fixer" Jillian Hall, began when he stalked the duo throughout a number of shows. During an episode of SmackDown! he caught a fleeing Hall and shoved worms down the back of her skirt. On another, during a Piper's Pit segment, he not only sniffed the "growth" on Jillian's face, but licked it and bit it off. Layfield and The Boogeyman eventually met in a one-on-one contest at the 2006 Royal Rumble, with Boogeyman picking up the win in under two minutes.

A subsequent feud with Booker T, which saw him again stalking a wrestler and his female companion (this time Booker's wife Sharmell) culminated at WrestleMania 22, when Boogeyman pinned Booker T after kissing Sharmell while holding a mouthful of worms. The match was exceptionally short because shortly before WrestleMania Boogeyman tore his left biceps at a house show. To explain his absence to rehab his injury, Booker T and Sharmell obtained a restraining order against The Boogeyman, who actually had surgery on April 4, to repair his biceps tear.

As SummerSlam approached, The Boogeyman began appearing in TV spots to promote the event. Vignettes also began airing advertising his return to SmackDown!. On September 20, WWE.com reported that Wright had been released from the company, however, a couple weeks later, on October 6, WWE.com announced that Wright had re-signed with the company and would be sent to be trained at Booker T and Stevie Ray's wrestling school in Houston, Texas. Wright returned on the October 27 SmackDown!; while teaming with Layla, he started a feud with The Miz and Kristal Marshall. During the feud he again terrorized and stalked his opponents, spitting worms at them and scaring them at every opportunity, and eventually ended The Miz's undefeated streak at the Armageddon pay-per-view.

Wright then feuded with Finlay, who ended The Boogeyman's undefeated streak when Hornswoggle interfered. On the February 2 edition of SmackDown! during a match against Chris Benoit for the WWE United States Championship, Boogeyman abducted Hornswoggle, distracting Finlay and giving Benoit a chance to win the match with a roll-up. On the February 16 edition of SmackDown! The Boogeyman appeared with a little person of his own, Little Boogeyman, who was portrayed by an actor named Chris Hollyfield. Chris also previously had played Lil Booker T. His purpose was to counteract Hornswoggle, who was proving a problem in one-on-one matches with Finlay. The Boogeyman and the Little Boogeyman lost to Finlay and Hornswoggle in a mixed tag team match at No Way Out. The team lost a rematch the following week on SmackDown!; Little Boogeyman was pinned by Finlay, after Wright had chased away Hornswoggle.

The Boogeyman ended his tenure on SmackDown with a loss to Mark Henry in a squash match, as part of Henry's new "Path of Destruction" gimmick. After that match, Mark Henry then beat up Little Boogeyman who was at ringside, and Henry gave him a body splash, (kayfabe) severely injuring him. This turned out to be the last time Little Boogeyman appeared on WWE TV.

ECW and release (2007–2009)
On the June 11 edition of Raw, The Boogeyman was moved from the SmackDown brand to ECW in the annual WWE draft. The next day he debuted for the brand and defeated Matt Striker, beginning a feud with him. On July 10 in New Orleans, The Boogeyman was a guest during a Striker's Classroom segment, ostensibly to be educated on worms, only to be attacked by Striker's debuting enforcer, Big Daddy V. The Boogeyman was not seen for the next three weeks, finally re-emerging on the July 31 episode — with a new face paint design and black contact lenses — to scare Big Daddy V off after he finished a match. Boogeyman was taken out by Big Daddy V from behind after a distraction from Striker a week later.

Boogeyman's return to wrestling action was initially delayed due to a torn calf muscle, but it had also been reported that he was having dental surgery done to replace missing teeth. On the October 7 episode of ECW a vignette was aired promoting The Boogeyman's return. Additional vignettes aired for a few weeks after that. On the October 13, 2008 edition of Raw, The Boogeyman made his return, appearing during a segment with Jackass's Johnny Knoxville, Chris Pontius, and Big Dick Johnson ending with The Boogeyman bringing live worms out of a bag and after putting them in his own mouth spat them into the mouth of Pontius.

The Boogeyman made his ECW return on the November 25 episode, in a segment with John Morrison and The Miz. He made his return to in ring competition on December 9 against Scott Reed, a local talent, who he defeated with ease. On the December 30 episode of ECW, he lost to John Morrison and The Miz in a No DQ match with Finlay as his partner. On the January 20, 2009 edition of ECW, he defeated Paul Burchill by disqualification, his first victory over a non-enhancement talent since returning to the brand. His last appearance on WWE programming was on March 3, 2009 where he lost in a match against Kane. The next day on March 4, 2009 WWE announced that they had released Wright from his WWE contract.

Independent circuit (2009–2013)
After WWE, Wright returned to the Pro Wrestling Alliance using his Boogeyman gimmick. Later, using a new gimmick called Slither, he wrestled at Northeast Wrestling as The Nightcrawler, defeating Jake Manning. Wright made his debut for The Millennium Wrestling Federation (MWF) at Soul Survivor VI on April 24, 2010. He defeated "Executioner" Brian Milonas. During late December 2011 Wright made an appearance on UWD (United Wrestling Destruction) where he defeated new comer Harry Janes at the special event "Win Or Lose." He returned using his old The Boogeyman gimmick at Cyberstarz event of Millenium Wrestling Federation on February 2012, where he defeated Lukas Sharp. After that, he left the wrestling business for quite some time, before decided to return on July 9, 2012 where he was available on independent scene bookings. On August 11, 2013, Wright using The Boogeyman gimmick made an appearance for Juggalo Championship Wrestling JCW s Bloodymania 7 teaming with Kongo Kong to face 2 Tuff Tony and a returning Vampiro in a losing effort.

On January 25, 2015 at Royal Rumble, Boogeyman entered the Royal Rumble match as a surprise entrant at number 7 marking his first WWE in–ring performance in almost six years, but was quickly eliminated by Bray Wyatt. Boogeyman made brief appearances on the July 20 and August 31 episodes of the WWE Network show, WWE Swerved.

On November 6, 2015, it was announced that Wright has signed a legends contract (a long-term deal to make infrequent, non-wrestling appearances) with WWE.