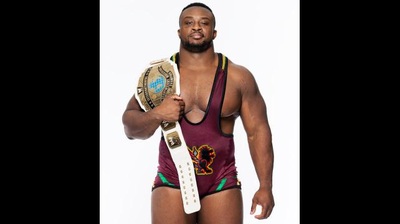 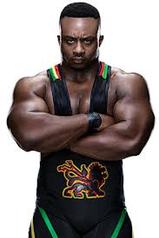 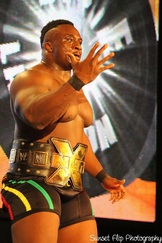 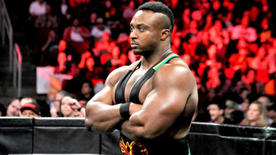 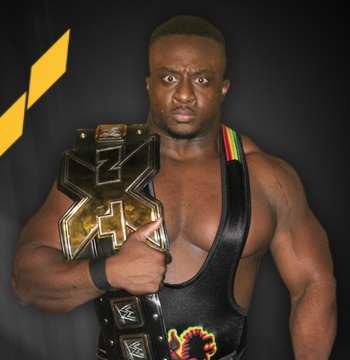 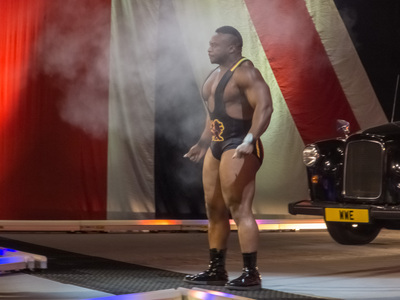 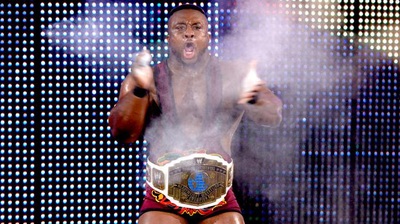 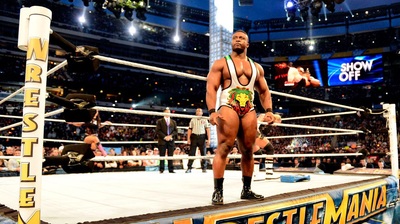 Big E at WrestleMania Axxess in April 2012.
In 2009, Ewen signed a developmental contract with World Wrestling Entertainment (WWE). He was assigned to its developmental territory, Florida Championship Wrestling (FCW), where he debuted on December 17, 2009 under the ring name Big E Langston. On May 12, 2011, Langston and Calvin Raines defeated Richie Steamboat and Seth Rollins to win the Florida Tag Team Championship. They lost the title to C.J. Parker and Donny Marlow on July 21, 2011. During the WrestleMania XXVIII Axxess event in April 2012, Langston defeated Antonio Cesaro.

When WWE rebranded its developmental territory, FCW, into NXT, Langston made his NXT debut on August 1, 2012, defeating Adam Mercer. This marked the start of a winning streak for Langston, who from September started repeatedly performing his finisher on his opponents and demanding that referees count to five (rather than the usual three) before awarding him pinfalls. After Langston rejected Vickie Guerrero's managerial services, Guerrero promised a $5,000 bounty to anyone who could put Langston "on the shelf"; but attempts to claim the bounty by Chad Baxter and Camacho were firmly squashed by Langston. The bounty was ultimately declared void by NXT Commissioner Dusty Rhodes. Langston then began to feud with The Shield, and on the December 6 tapings of NXT (which aired January 9, 2013), Langston defeated NXT Champion and Shield member Seth Rollins in a no disqualification match to win the title.

After Langston successfully defended his NXT Championship against Conor O'Brian, Corey Graves, Brad Maddox and Damien Sandow, he eventually lost the NXT Championship to Bo Dallas on May 23, 2013 (aired on June 12).

Big E on Raw in April 2013.
Langston made his WWE main roster debut on the December 17, 2012 episode of Raw, attacking John Cena thus establishing himself on the main roster as a heel, and aligning himself with AJ Lee. Langston went on to act as an enforcer for AJ's boyfriend, Dolph Ziggler, interfering in his matches. On April 7, 2013, at WrestleMania 29, Langston and Ziggler unsuccessfully challenged Team Hell No (Daniel Bryan and Kane) for the Tag Team Championship. Langston wrestled his first match on Raw the following night, defeating Bryan.

After Ziggler suffered a concussion in May, Langston wrestled a series of five matches against Ziggler's World Heavyweight Championship contender Alberto Del Rio, which Del Rio won 3–2. On the June 10 episode of Raw, Langston was revealed as the secret admirer of Divas Champion Kaitlyn; this in turn was revealed to be a ploy by AJ, the number one contender to Kaitlyn's title, to humiliate Kaitlyn. Langston and AJ continued to mock Kaitlyn over the following weeks, with AJ ultimately retaining her Divas Championship in a bout with Kaitlyn at Money in the Bank on July 14. Ziggler ended his relationship with AJ the following night on Raw, leading to Langston attack him later in the evening. On the July 29 episode of Raw, Langston was defeated by Ziggler via disqualification after AJ interfered and attacked Ziggler. In a rematch on the following week's Raw, Langston defeated Ziggler following a distraction by AJ and Kaitlyn. On August 18 at SummerSlam, Langston and AJ were defeated by Ziggler and Kaitlyn in a mixed tag team match, putting an end to their feud. After this loss, Langston stopped aiding AJ altogether and started wrestling alone.

Intercontinental Champion (2013–2014)
On the October 18 episode of SmackDown, Langston lost to CM Punk and turned face after the match when Langston took offense to Paul Heyman's comments about Punk beating "a rookie", and aided Punk in fending off an attack by Ryback and Curtis Axel.[42] Three days later, on the October 21 episode of Raw, Langston would team up with Punk to defeat Ryback and Axel, with Langston pinning Axel. Though granted a shot at Axel's Intercontinental Championship, Axel's injury denied Langston this opportunity. Renewing his rivalry with the Shield, Langston challenged for Dean Ambrose's United States Championship at Hell in a Cell. While Langston won the match by countout, he failed to win the title. The following night on Raw, Langston was granted a rematch for the title, winning by disqualification after Roman Reigns and Seth Rollins interfered.

On the November 18 episode of Raw, Langston was given his championship match with Axel, where he defeated him to win the Intercontinental Championship for the first time.[43] Six days later, at Survivor Series, Langston defeated Curtis Axel in his first title defense.[44] Langston successfully retained his championship against Damien Sandow at the TLC pay-per-view. At the Elimination Chamber pay-per-view with his ring name now shortened to "Big E", he successfully defended his championship against Jack Swagger. Big E competed in the Andre the Giant memorial battle royal at WrestleMania XXX, being eliminated by Fandango. At Extreme Rules on May 4, Big E dropped the Intercontinental title to Bad News Barrett, and failed to regain it the following night on Raw. Big E later became involved in a feud with Rusev, which lead to consecutive bouts at Payback and at Money in the Bank, both of which Big E lost. At Battleground, Big E failed to win a battle royal for the Intercontinental Championship.

Big E (center) with Kofi Kingston and Xavier Woods as The New Day in January 2015
On the July 21 episode of Raw, after Big E and Kofi Kingston suffered another loss as a team, Xavier Woods confronted them, declaring that they could not "get ahead by kissing babies and shaking hands". Instead, it would be "their time" to "take". The duo accepted Woods' offer, and on the next day's Main Event, Woods managed Big E and Kingston to a decisive victory over Heath Slater and Titus O'Neil. However, Woods' group quickly and quietly disbanded, as on the August 8 episode of SmackDown and on the August 12 episode of Main Event, both Big E and then Kingston reverted to wrestling singles matches with no sign or mention of the other two members of the group. Despite being disbanded on WWE television, Big E, Kingston and Woods maintained their alliance at live events. From the November 3 episode of Raw, WWE began airing vignettes for Big E, Kingston and Woods, with the stable now being billed as "The New Day". The New Day made their in-ring debut on the November 28 episode of SmackDown in a winning effort against Titus O'Neil, Heath Slater and Curtis Axel.