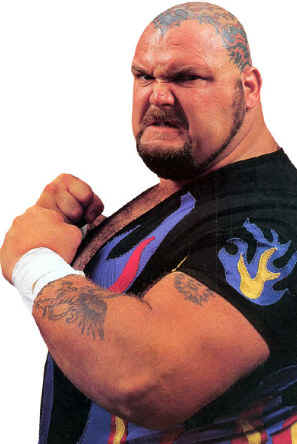 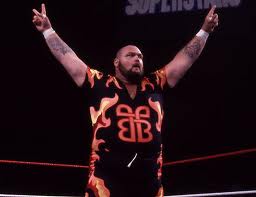 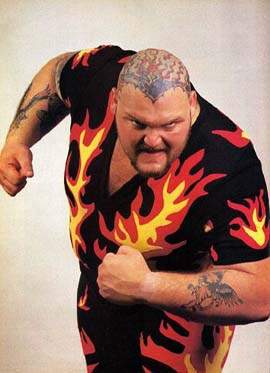 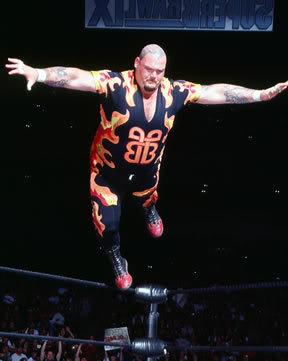 Memphis
After training in Larry Sharpe’s Monster Factory in New Jersey, Bigelow debuted as an athletic and agile monster heel in the Memphis territory of Jerry Lawler and Jerry Jarrett in the summer of 1986. Billed as "the Beast of the East" and referred to as "the Bammer" by announcer Lance Russell, Bigelow was slowly established as an unstoppable force who challenged then-champion Jerry Lawler.

World Wrestling Federation (1987–1988)
In May 1987, he signed with the World Wrestling Federation (WWF). The storyline upon his debut was that the various heel managers were all vying for Bigelow's services. The angle was thus called "The Battle for Bam Bam." Bigelow in the end wound up a babyface when he denounced all the heel managers and announced that his manager was going to be Oliver Humperdink. Fans were entertained by Bigelow's unique style and his remarkable agility for a man his size. His first WWF encounters were Nikolai Volkoff and his jilted manager Slick. Bigelow wrestled as a part of Hulk Hogan's team at the first Survivor Series, in which he survived longer than even Hogan (the biggest star in wrestling history at the time). He eliminated both King Kong Bundy and One Man Gang, but eventually lost to sole survivor André the Giant.[3] He wrestled in the WWF for one year before leaving to have surgery on a badly injured knee. Despite this injury, he performed anyway to elevate the status of his co-performers. Bigelow lost by count-out to One Man Gang in the first round of WrestleMania IV's WWF World Heavyweight Championship tournament.

Jim Crockett Promotions and Japan (1988–1992)
Bigelow briefly re-emerged with the NWA member Jim Crockett Promotions in late 1988, and was immediately set up to challenge Barry Windham for the NWA United States Heavyweight Championship. While NWA wanted control of Bigelow, his loyalty was with New Japan, to whom he was committed.

After this brief stay, Bigelow went to Japan to work for the legendary Antonio Inoki's New Japan Pro Wrestling. Here, he formed a tag team with Big Van Vader, winning the IWGP Tag Team Championship. In 1992 he left New Japan, performing for several other Japanese professional wrestling promotions. His time in these promotions featured a win over Japanese wrestling legend Kenta Kobashi during a brief stint in All Japan Pro Wrestling.

Bigelow in the WWF in October 1994.
In late 1992, Bigelow returned to the WWF as a heel. In his pay-per-view return, he defeated The Big Boss Man at the 1993 Royal Rumble. That June, Bigelow made it to the finals of the 1993 King of the Ring tournament, losing a match to Bret Hart (In a shoot interview, Bigelow stated that Hart had farted in his face during the match when Hart went for a victory roll and pin). Soon after, Luna Vachon became Bam Bam's love interest and manager. Bigelow went on to feud with Tatanka and Doink the Clown; he teamed with The Headshrinkers to lose to Tatanka and The Smoking Gunns at SummerSlam 1993, his team consisting of The Headshrinkers and Bastion Booger was defeated by The Four Doinks (The Bushwackers and Men on a Mission) at the 1993 Survivor Series, he lost to Tatanka at the 1994 Royal Rumble and he teamed with Luna to defeat Doink and Dink at WrestleMania X. In mid-1994, he was made part of Ted DiBiase's Million Dollar Corporation faction, often teamed-up with fellow Corporation members Irwin R. Schyster and (a now heel) Tatanka. Bigelow also survived a high profile Survivor Series-style match, with Corporation member King Kong Bundy, at the 1994 Survivor Series; they faced Lex Luger's "Guts and Glory" team.

After Bigelow and Tatanka lost in the finals of a WWF World Tag Team Championship tournament to Bob Holly and the 1-2-3 Kid at the 1995 Royal Rumble, Bigelow was mocked at ringside by former New York Giants All-Pro linebacker Lawrence Taylor. Bam Bam fought back, shoving "L.T." at ringside, and was soon engaged in a highly publicized feud with the famous ex-football player. Bigelow was defeated by Taylor in the main event at WrestleMania XI. Shortly after WrestleMania tensions were starting building up between Bigelow and Ted DiBiase. After he lost a match with then WWF champion Diesel in a RAW main event; DiBiase slapped him and led the entire Million Dollar Corporation to take him down (including newly joined member Sycho Sid). Diesel made the save and Bigelow turned babyface, publicly quitting the Million Dollar Corporation. He was teamed with then WWF World Champion Diesel at the 1995 King of the Ring; they defeated Corporation members Tatanka and Sycho Sid. Bigelow's last WWF match was a loss to Goldust at Survivor Series 1995.


Bam Bam Bigelow at a U-Japan MMA event in November 1996.
On November 17, 1996, Bigelow competed in a "U-Japan" mixed martial arts event against Kimo Leopoldo. Bigelow was dominated throughout the match, being mounted within the first 10 seconds. He lost to a rear naked choke in the first round. Despite not being a trained mixed martial artist, Bigelow was able to command a substantial purse for the fight (Bigelow claimed in his 1998 RF Video shoot interview that he received $100,000; though it has been suggested by others that he actually received $75,000). Bigelow later commented that despite the crushing defeat, he would gladly sign up for other MMA fights providing the financial rewards were as appealing; however, he never fought after that. Bigelow would later claim in a shoot interview that the fight was a work and he received minimal damage for a nice paycheck. He then claimed that he was the "world's highest paid jobber."

He returned to Paul Heyman's ECW in 1997, eventually joining with the re-formed Triple Threat faction, with Chris Candido and lead member Shane Douglas. He was a dominant force in ECW, carrying out feats of strength such as hurling Spike Dudley out of the ring and into the audience and slamming Taz through the ring itself. He held the ECW World Television Championship and the ECW Championship during his run. Bigelow turned on fellow Triple Threat member, Shane Douglas, under the guidance of Rick Rude and won the ECW World Heavyweight Title in October 1997. He would go on to lose the belt back to Douglas at the November to Remember pay-per-view in a classic match. Both men were so badly injured as a result of the match that they didn't appear on television for over a month.

They continued to feud, with Bam Bam looking to Taz to join him in his campaign against the Triple Threat. Eventually, he turned on Taz and rejoined the group as Triple Threat prospect Lance Storm was tossed aside. His reign as World TV Champion began with a victory over Taz at the Living Dangerously pay-per-view in March 1998. After defending the title in a few vicious brawls with The Sandman, Bigelow was defeated by Rob Van Dam. RVD was assisted by Sabu, who had originally been scheduled to receive a shot at Bigelow's title; Van Dam was only supposed to "soften up" the Beast from the East. Bigelow remained in the Triple Threat and continued to feud with Taz for most of 1998. By the end of the year, he left the company for WCW.

World Championship Wrestling (1998–2001)
On November 16, 1998 Bigelow debuted in World Championship Wrestling. He initially was portrayed as an unwelcome guest from outside the company and feuded with then-WCW World Heavyweight Champion Goldberg before being shifted to the WCW Hardcore division, along with fellow ECW alumni Raven and Hardcore Hak. He was put in a stable with Diamond Dallas Page and Chris Kanyon, known as the Jersey Triad, in May 1999. After the Triad disbanded, Bigelow began feuding with ECW alumnus Mike Awesome, who defeated him in an ambulance match at Starrcade 2000. His final feud in WCW was with Shawn Stasiak, culminating on the final episode of WCW Nitro in March 2001. The stipulation of the match was that, if Bigelow won, he would tattoo "that sweet thing" in the ring (Stasiak accepted the stipulation, assuming he meant his valet Stacy Keibler when he was, in fact, referring to Stasiak himself). However, Stasiak won the match.

Independent circuit (2002–2006)
Bigelow remained with WCW until the company was purchased by the WWF in March 2001. Then, he waited until his Time Warner (the major corporation that had bought the promotion from Jim Crockett in 1989) contract expired in June 2002. He returned to the ring, making several appearances for USA Pro Wrestling. He performed his final wrestling match on October 25, 2006 for the American Combat Wrestling promotion, teaming with Ralph Mosca as "The Syndicate" in a tag team match against Overkill (Legion Cage and Marcus Hall).