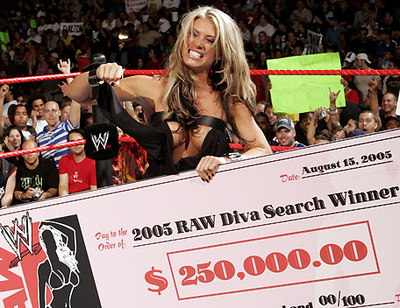 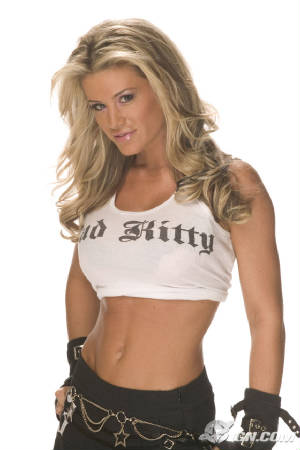 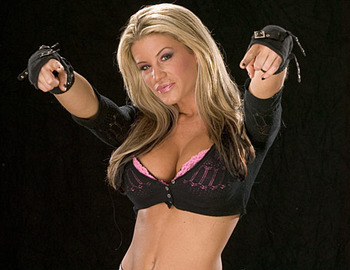 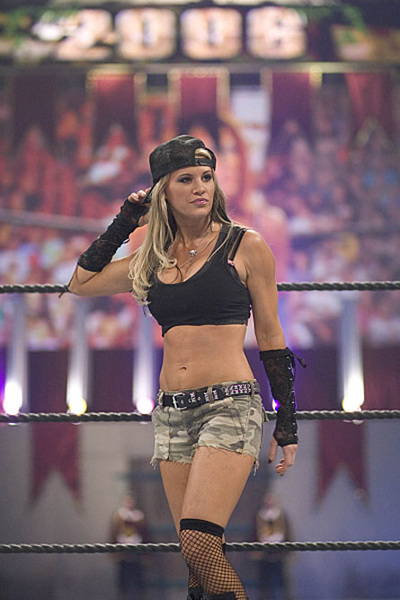 Professional wrestling career
World Wrestling Entertainment (2005–2008)
Diva Search (2005)
Massaro initially found out about World Wrestling Entertainment's (WWE) 2005 Raw Diva Search when she met a WWE casting director during a swimsuit pageant. After beating the seven other chosen finalists, Massaro was declared the winner on the August 15, 2005 edition of Raw. Her winnings included $250,000 and a one-year contract with WWE.

Raw (2005–2006)
See also: Vince's Devils
A week later on Raw, Candice Michelle and Torrie Wilson attacked Massaro after pretending to welcome her to Raw. Massaro's storyline feud with Wilson and Michelle continued over the next couple weeks, as the duo, along with their enforcer Victoria (dubbed as the "Skankateers" by commentator Jim Ross), made things difficult for Massaro. Massaro made her in-ring debut on the August 29 episode of Raw, in losing effort to Victoria. On the September 5 episode of Raw, Massaro was defeated by Wilson after the interference from Victoria and Candice. Massaro evened the score on the September 12, 2005 episode of Raw when she brought out the returning Trish Stratus, and the duo proceeded to attack the villains. On the September 18 episode of Raw, The pair defeated the trio—who became known as the Ladies in Pink (and later Vince's Devils). This led to a tag team match at Unforgiven, where the team of Stratus and Massaro defeated Wilson and Victoria. The following night on Raw, Massaro accompanied Trish where she defeated Wilson. After the match, The duo were attacked by The Vince Devils. The feud continued into WWE Homecoming, where Stratus and Massaro defeated Wilson, Candice, and Victoria in the first ever three on two Bra and Panties match by stripping all three of their opponents. Massaro continued to wrestle matches through the rest of 2005 and was involved in the annual Fulfill Your Fantasy Diva Battle Royal at Taboo Tuesday for her first shot at the WWE Women's Championship. Massaro eliminated Candice Michelle before being eliminated by Victoria. At New Year's Revolution in January, Massaro won the first ever Bra and Panties Gauntlet match by being the final Diva left still wearing her clothes. Following WWE tradition, to please the fans, she removed them herself before making her exit.

Through the early part of 2006, Massaro became the victim of a series of attacks from Mickie James. At the Royal Rumble, James defeated Massaro with then Women's Champion, Trish Stratus, as the special guest referee. Massaro got her revenge one week later by pinning James in the rematch on Raw. During the February 20, 2006 edition of Raw, however, Massaro suffered a fractured left fibula while being eliminated from the Women's Battle Royal, and her feud with James was cut short. She underwent surgery to insert a five-inch metal plate and eight screws into her leg. During her recovery, Massaro still occasionally appeared on Raw as part of the Stratus/James feud, albeit in a non-active role. Massaro returned on the March 20, 2006 episode of Raw, being kidnapped by James to lure Stratus in to saving her but James was successful and attacked Stratus.

SmackDown! (2006–2007)
She returned to television on June 2, now on SmackDown!, as a special guest commentator during the Kristal Marshall versus Jillian Hall match. On the June 9 edition of SmackDown!, Ashley defeated Kristal, Jillian Hall and Michelle McCool in a Bikini contest. Massaro later aligned herself with Hall, and they feuded with Michelle McCool and Marshall. Massaro won her SmackDown! debut match on July 21, when she teamed up with Hall to defeat McCool and Marshall. At The Great American Bash, Massaro won the Fatal Four-Way Bra and Panties match by removing all of her opponents clothing. On the August 4 edition of SmackDown!, Massaro broke her knuckle in a match against Marshall.


Massaro in 2007.
Massaro, Paul London, and Brian Kendrick defeated Idol Stevens, K.C. James and Michelle McCool in a Six-Person Mixed Tag Team match. Following the victory, Massaro became the valet for London and Kendrick, accompanying them to the ring for their matches on SmackDown! and pay-per-views. On the October 27 episode of SmackDown!, Ashley participated in a Diva’s “Trick or Treat Battle Royal which was won by Kristal. On the December 19 edition of SmackDown!, Ashley teamed up with Layla in a winning effort defeating Jillian Hall and Kristal in a divas-tag-team match. On the January 2 edition of SmackDown!, Ashley competed against Hall in a winning effort. On the January 26 episode of SmackDown!, Ashley teamed up with London and Kendrick in a losing effort to the MNM (Mercury & Nitro & Melina) in a six person mixed-tag-team match. During the February 16, 2007 edition of SmackDown!, Massaro unveiled her Playboy cover. Surrounding the release of the magazine, Massaro engaged in a feud with Jillian Hall, who was jealous over the attention Massaro received due to the Playboy cover. At No Way Out, Massaro won the first ever Diva Invitational by removing her top to reveal her breasts which were covered with Playboy bunny pasties.

Massaro also began a feud with then WWE Women's Champion, Raw's Melina, who was angry over the publicity Massaro had been receiving because of the cover. On the March 9 episode of SmackDown!, the rivalry was taken to the next level when a catfight broke out between the Divas on the inaugural edition of Miz TV. On the March 16 episode of SmackDown!, Ashley teamed up with London and Kendrick in a losing effort to the MNM (Mercury & Nitro & Melina) in a six person mixed-tag-team match. On the March 23 episode of SmackDown!, Ashley would get a catfight after Melina attempted to make an interference during Kendrix and Paul's match with MNM. On the March 26 episode of Raw, Ashley teamed up with Torrie Wilson and Candice Michelle in a winning effort defeating Melina, Hall and Victoria.[4] At WrestleMania 23, Massaro unsuccessfully challenged Melina for the WWE Women's Championship in a LumberJill match to retain her title.

After WrestleMania, Massaro continued as a valet for WWE Tag Team Champions Paul London and Brian Kendrick. In storyline, on the April 13 episode of SmackDown!, Massaro was attacked by Jillian Hall. In reality, Massaro had loosened a screw in her ankle, which had been inserted the previous year after she legitimately fractured her tibia and fibula while in a battle royal. Massaro returned on the June 1, 2007 episode of SmackDown!, helping McCool defeat Hall after she distracted her. This return was short lived when on the June 8 edition of SmackDown!, Massaro was suspended indefinitely after accidentally spilling Mr. McMahon's coffee on him. In reality, Massaro was taking time off to participate on the show Survivor.

Massaro (far left) with tag team partner Maria and Master of Ceremonies Snoop Dogg at WrestleMania XXIV
Massaro returned on January 7, 2008 to the Raw brand, winning a Divas Lingerie Pillow Fight against Maria, Jillian Hall, Melina, and Mickie James. On the January 14 episode of Raw, Ashley teamed up with Mickie James and Maria in a losing effort to the team of Beth Phoenix, Jillian Hall, and Melina in a 6 person-tag-team match.

Ashley began a storyline with Maria and Santino Marella at the January 21, 2008 episode of Raw, attempting to convince Maria to pose for Playboy but was interrupted by Marella. At the Royal Rumble pay-per-view, Ashley again attempted to convince Maria by telling her that Hugh Heffner wanted her to pose for Playboy before Maria could answer Marella interrupted and objected to the proposal. Ashley would then beat down Marella's surprise Big Dick Johnson when he attempted to perform a strip tease. At the No Way Ouy pay-per-view, Ashley would appear with Maria in a segment at the Playboy Manison. On the March 24, 2008 episode of Raw, Ashley interfered in the match between Maria and Melina. After the match, Santino Marella came down to the ring so Jerry “The King” Lawler (whom was tired of Marella's actions over pervious weeks) knocked Santino out of the ring. Which set up the six person mixed-tag-team match, in which they lost to Marella, Melina and Phoenix. Massaro replaced Candice Michelle, who was out with an injury, in the Playboy Bunnymania Lumberjack match at WrestleMania XXIV teaming up with Maria, losing to Beth Phoenix and Melina after the interference from Marella.