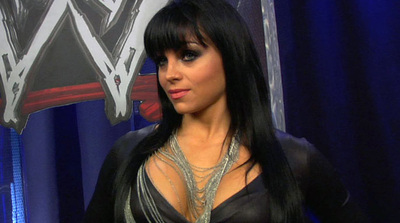 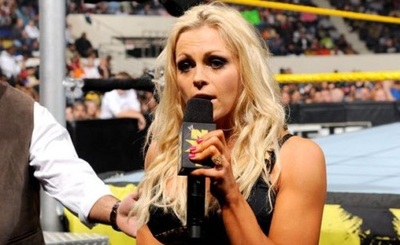 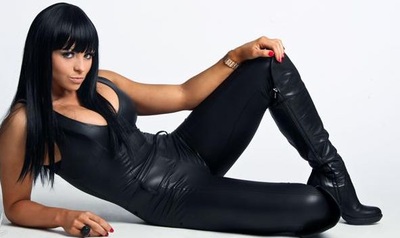 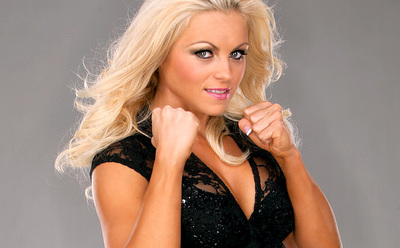 Early career (1996-2009)
Raudonienė worked as a successful bodybuilder, fitness model and personal trainer and she won the 2009 IFBB Arnold Classic Contest and has competed in numerous other bodybuilding contests. Raudonienė has been working out since the year 1996 in her home of Lithuania and after a year she entered her first fitness contest. At the age of 17 she was the youngest participant in the 1999 IFBB European Fitness Championships.

World Wrestling Entertainment / WWE (2009-2014)
Developmental territories (2009–2011)
In an interview that aired in September 2013, Raudonienė claimed that she had been signed by WWE and was training at their developmental territory Florida Championship Wrestling. Raudonienė made her FCW debut under the ring name "Olga" at a FCW house show in a Divas Halloween Costume contest on October 29, 2009. The following month, her ring name was changed to Aksana, and she began to manage Eli Cottonwood. She was also involved in a storyline where she was kidnapped by Sweet Papi Sanchez, over the next couple of weeks, videos of Aksana were shown to Cottonwood until she was returned to him.

Aksana made her in ring debut at an FCW house show on January 15, 2010 when she teamed with AJ Lee, Savannah, and Eve Torres to defeat Serena Mancini, Naomi Night, Courtney Taylor, and Liviana. She began appearing on The Abraham Washington Show, Abraham Washington's in-ring talk show segment, where she acted as his sidekick. She continued to wrestle as well, appearing in several multi-Diva tag team matches. On April 15, 2010 episode of FCW Television, Aksana teamed with Hunico and Tito Nieves in a mixed tag team match, defeating The Usos and Tamina. When it was announced that there would be a creation of the FCW Divas Championship, Aksana competed in a tournament to determine the inaugural champion, only to be defeated in the first round by Serena at the April 29, 2010 television tapings. She also briefly managed Johnny Curtis in the months of April and May. In July, Aksana competed in several bikini contests against the other FCW Divas, winning one on July 8, 2011. The following month, she began hosting The Aksana Show, a spin-off of The Abraham Washington Show, having guests including Mason Ryan, FCW Florida Tag Team Champions Johnny Curtis and Derrick Bateman, Maxine, Rosa Mendes and FCW Divas Champion Naomi Knight.

NXT (2010)
On August 31, 2010 it was announced that Raudonienė would be part of the third season of NXT, under the ring name of Aksana, with Goldust as her storyline mentor. She appeared on the first episode of the season on September 7, 2010 where she teamed with Goldust in a loss to A.J. and Primo in a mixed tag team match. The following week, she lost to Jamie Keyes in a singles match. On the September 21, 2010 episode of NXT, Aksana began a storyline where she was having problems with her visa and was facing deportation from the United States. On the October 5, 2010 episode of NXT, Aksana won a challenge for the first time by winning the mechanical bull riding contest, before defeating Maxine in a match. The following week, Goldust proposed marriage to Aksana so she could stay in the United States, which she accepted.

At Bragging Rights, Aksana accompied Goldust where he was defeated DiBiase following after Aksana was attacked by Maryse and she took back the Million Dollar belt, but Goldust still left with the title after Aksana took it back and distracted DiBiase long enough for Goldust to hit his finisher on him. On the October 26 episode of NXT, Aksana teamed up with Goldust to defeat Maryse and Ted DiBiase, after the match Maryse proceed to take the belt again but again was stopped by Aksana. On the November 2, 2010 edition of NXT, Goldust and Aksana's wedding took place. As Goldust was about to plant a kiss on his new wife, Aksana slapped him and walked off, turning heel in the process.

The following Monday on Raw Aksana stole Goldust's Million Dollar Championship, which he had stolen from Ted DiBiase. The next night on NXT, Goldust confronted his wife about their wedding. Aksana, now holding the Million Dollar Championship, revealed to Goldust that she never loved him, and only married him to stay in the country as if she returned to Lithuania she'd be beaten with shovels. Goldust responded by putting Aksana in a match with Naomi, in which she lost. The following week on Raw, Goldust took back the Million Dollar Championship from Aksana with help from Kelly Kelly and Dusty Rhodes, and gave it back to Ted DiBiase, Sr. The next night on the November 16, 2010 episode of NXT, Aksana was defeated by AJ via submission, later that night Aksana was eliminated from the competition. She returned on the season finale on November 30, 2010 where she teamed with Alicia Fox and Maxine in a loss to A.J. and The Bella Twins.

Aksana in July 2013.
On the August 5 episode of SmackDown, Aksana made her debut as a face character, where she introduced herself to SmackDown General Manager Theodore Long in a backstage segment. On the October 28 edition of SmackDown, Aksana appeared backstage with Theodore Long for the first time in over a month, this time interrupting his conversation with Hornswoggle. On the October 31, edition of Raw, Aksana competed in her first match on the main roster, which was a Divas Halloween Costume battle royal match to become the number one contender for the WWE Divas Championship at the 2011 Survivor Series pay-per-view. However, she was unsuccessful in becoming the number one contender after being eliminated by The Bella Twins. On the January 27, 2012 edition of SmackDown!, Aksana won her in-ring debut by defeating Natalya. After the match, Natalya attacked Aksana, but Tamina saved her.

After Long was replaced as General Manager at in April, Aksana turned heel by beginning a storyline relationship with the debuting Antonio Cesaro. On the June 29 episode of SmackDown!, Long announced that he would be the acting General Manager for both SmackDown and Raw the next week, then pitted Aksana and Cesaro in a mixed tag team match against The Great Khali and the Divas Champion Layla, which they lost.

On the October 12 episode of SmackDown, Layla and Kaitlyn revealed that Aksana found a blonde wig in the bag belonging to Eve Torres, implicating Eve's involvement in an attack on Kaitlyn at the Night of Champions pay-per-view. On the October 26 episode of SmackDown, it was revealed that it was Aksana who attacked Kaitlyn at Night of Champions and that Eve sent her a text message to do so. Later that night, Aksana teamed up with Eve against Layla and Kaitlyn in a winning effort after Layla's interference backfired. At the Survivor Series pay-per-view, the villainous Aksana attacked Kaitlyn while disguised in a hoodie and a blonde wig, but Kaitlyn fought her off and removed the wig. During the pre-show of the TLC: Tables, Ladders & Chairs pay-per-view on December 16, Aksana participated in her first WWE pay-per-view match competing in the "Santa's Little Helpers" battle royal which was won by Naomi. Eve Torres would quit WWE after she lost her Divas Champion to Kaitlyn, ending their alliance in the process.

Foxsana (2013–2014)
On September 6, Aksana aligned herself with Divas Champion AJ Lee along with Alicia Fox and Layla against the Total Divas by attacking them. On November 24 at the Survivor Series pay-per-view, Aksana took part of traditional seven-on-seven elimination tag team match against the cast of Total Divas, where she eliminated Brie Bella, before being eliminated by Nikki Bella.


Foxsana posing together in April 2014
Aksana pinned The Bella Twins in two separate occasions; Nikki on the December 30 episode of Raw in a ten-Divas tag team match after a distraction by Rosa Mendes, and Brie in a tag team match on the January 6 episode of Raw. Aksana and Fox began being referred to as "Foxsana" as of January 22 episode of Main Event, where they lost to The Bella Twins. On the February 3 episode of Raw she legitimately injured Naomi's eye, fortunately proving to be less severe than first thought. On the February 26 episode of Main Event, Foxsana defeated Eva Marie and Natalya when Aksana pinned Natalya after an miscommunication between Marie and Natalya.

On June 12, 2014, WWE announced that Aksana had been released from her contract, along with 10 other talents. Her last match took place on the June 13 episode of SmackDown, where she lost to Fox.