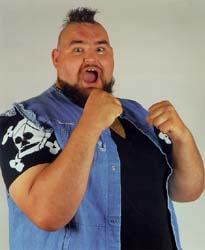 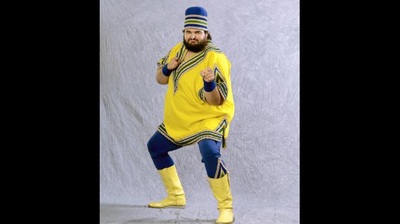 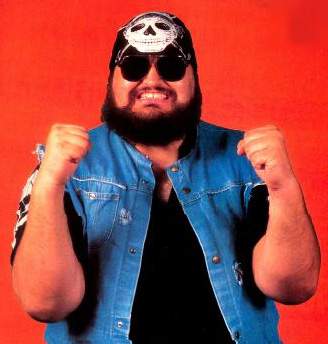 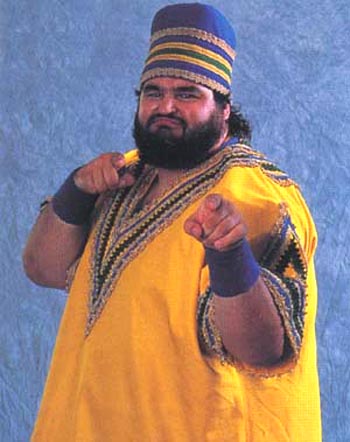 Early career (1977-1987)
Gray, a native of South Carolina, trained with longtime local independent wrestler and promoter Chief Jay Eagle (Jerry Bragg) and Darren "Rattlesnake" Westbrooks. He started his career at the age of 17 on the Carolina independent circuit wrestling both under his real name and as "Crusher Gray." He then moved onto wrestle in the Kentucky/Tennessee area, including for International Championship Wrestling, under the ring name Crusher Broomfield. Gray went in as part of a package along with Bragg, Westbrooks, and Ric Starr. One of Broomfield's major angles was that his contract was owned by ICW Champion Randy Savage and Savage's nemesis Ron Garvin defeated Savage in a match to set Broomfield free. He later worked for several National Wrestling Alliance-affiliated promotions, Mid-South Wrestling, and World Championship Wrestling as One Man Gang, billed as being from Chicago's Halsted Street on the South Side. He was managed by Kevin Sullivan, Theodore Long, Gentleman Jim Holiday, and Sir Oliver Humperdink in various territories.

In the regional territories, he was a member of Skandor Akbar's "Devastation Inc." as well as working with Gary Hart in World Class Championship Wrestling. It was as a protégé of Akbar's in the Mid-South territory where Gray would get the name that would stick with him the rest of his career. Making his debut in the territory by interfering in matches and assaulting the fan favorite, Mid-South announcer Jim Ross would say about the then-unnamed assailant "He's a one-man gang!". The Gang worked on-and-off in Mid-South in between tours of Florida, Japan, and Texas. He would also return to his hometown territory, the Carolinas, to work for Jim Crockett Promotions, where he was initially billed as "The One Man Gang, George Gray." He worked in Texas All Star wrestling where he feuded with Big Bubba. It was on his last tour for Mid-South when the promotion renamed itself the Universal Wrestling Federation, with Gang one of its top villains, feuding at the main-event level with UWF top fan favorite Jim Duggan. In late 1986, Gang won the UWF Heavyweight Championship in an angle where the champion Terry Gordy was injured earlier in the evening by a revenge-minded "Dr. Death" Steve Williams. Gang, scheduled to face Gordy later on the card, was awarded the belt via forfeit. He held that title for six months, mostly facing Duggan, Williams, and Ted DiBiase.

In May 1987, Gray began receiving inquiries from the World Wrestling Federation about coming up to wrestle for them. He promptly agreed to terms, but returned to the UWF in order to drop the title to Big Bubba Rogers, who was there from his normal place in the NWA due to the recent sale of the UWF to Jim Crockett.

World Wrestling Federation (1987–1990)
One Man Gang (1987–1988)
Gray made his debut in the WWF on May 12, 1987, being managed by Slick, in a match against Jesse Cortez. He spent much of his early WWF run defeating enhancement talent in extremely short matches in order to build him up, most notably in a match where he Gourdbustered his opponent after the bell and then did the same to the referee, thus being (kayfabe) fined $10,000 for his actions. While the Gang often defeated jobbers and other lower card wrestlers with ease, he was often on the end of defeat when main eventing against bigger stars such as Hulk Hogan and Randy Savage, although Gang was a major part of the angle regarding Billy Graham being forced into retirement. One Man Gang participated in the first ever Survivor Series pay-per-view as a member of André the Giant's team, fighting a team led by Hulk Hogan. In 1988, Gang entered the inaugural Royal Rumble at number 19 out of 20 participants and was one of the last two men left in the ring, before being eliminated by Jim Duggan. One Man Gang participated in the World Title Tournament at WrestleMania IV, defeating Bam Bam Bigelow by count-out in the opening round. He drew a bye in the quarterfinals before being disqualified in the semifinals against eventual-tournament-winner Randy Savage after Gang attempted to hit Savage with his manager's cane. Following his loss at WrestleMania, Gang was placed lower "on the card," feuding with Bam Bam Bigelow, Koko B. Ware, and Don Muraco.

Akeem; Twin Towers (1988–1990)
In September 1988, One Man Gang's manager, Slick, announced that Gang was actually African and planned to re-embrace his roots. An episode of WWF Superstars, which aired on September 24, 1988, featured a vignette with Gene Okerlund on-location in an American ghetto that was dubbed "The Deepest Darkest Parts Of Africa," where dancers dressed as tribal Africans danced and chanted around a fire; Slick then announced that Gang would be known by his new name, "Akeem, the African Dream." This vignette received some criticism, as the Caucasian "Akeem" delivered a promo in which he spoke with an extremely stereotypical black accent and mockingly danced while an African ritual took place in the background.

Akeem and the Big Boss Man captained a team that featured Ted DiBiase, the Red Rooster, and Haku to battle the Mega Powers' team at Survivor Series in 1988. During the match Akeem along with teammate Big Boss Man handcuffed Hulk Hogan to the ring post and were later disqualified. The two formed a team called the Twin Towers. Though the Twin Towers never held the WWF Tag Team Championship, they did feud heavily with WWF World Tag Team champions Demolition at house shows while also feuding with the Mega Powers and throughout the summer and fall of 1988, with the Twin Towers and Slick advertising title match that night against Demolition while on Arsenio Hall's talk show. They were also strongly involved in the storyline which would eventually cause Randy Savage to become a villain and challenge Hulk Hogan at WrestleMania V. In the Royal Rumble, Randy Savage was accidentally eliminated by teammate Hogan, allowing both Akeem and Bossman to double team Hogan and eliminate him. The Main Event show broadcast live on NBC on February 3, 1989 featured Hulk Hogan and Randy Savage vs. The Twin Towers. During the match, Savage's manager Miss Elizabeth was injured after Savage was thrown through the ropes and knocked her to the ground, which led Hulk Hogan to abandon his partner and carry Elizabeth back to the locker room for medical help. Although Hogan later returned to the match to help Savage defeat Akeem and Boss Man, Hogan's actions with Elizabeth caused Savage to attack him backstage, setting up the headline match for WrestleMania. The Twin Towers went on to face The Rockers at WrestleMania V and defeated them when Akeem pinned Shawn Michaels with a diving Air Africa after a powerbomb from the Big Boss Man.

In early 1990, Big Boss Man became upset with Slick always trying to take the credit for him (as well as refusing to be part of a payoff from Ted DiBiase) and turned on both his manager and his partner Akeem. He defeated Akeem at WrestleMania VI. Although Akeem remained in the WWF until October 1990, his loss to The Boss Man at WrestleMania was his last high profile match in the company. Gray left the World Wrestling Federation due to his fading role in the company at the time.

World Championship Wrestling (1991, 1995)
In early 1991, Gray resumed the One Man Gang gimmick in World Championship Wrestling and feuded with El Gigante (Jorge Gonzales). In a strange ritual, Kevin Sullivan sent the spirit of Akeem back to the underworld, while bringing back a now insane One Man Gang. He and manager Kevin Sullivan shaved Gigante's head in a post-match sneak attack. He lost a Hair vs Argentina (Gigante wins he shaves Gang's head, Gang wins Gigante goes back to Argentina forever) match on 1991's final Great American Bash event in Atlanta's Omni on August 25 (untelevised event that also included Lex Luger defeating Ron Simmons to defend his WCW World title and Sting winning the US title in a one-night tournament). He was promoted to be part of the infamous "Chamber of Horrors" match at WCW's Halloween Havoc '91 that October but left the company shortly before the event. Other notable matches from Gang's 1991 WCW run include being involved in a handful of War Games matches at Great American Bash house shows (lost with his manager Sullivan submitting) and advancing to the semi-finals of the WCW World Tag Title tournament with partner Black Blood over Big Josh and El Gigante (Gang and Black Blood becoming the first men to score a televised win against Gigante without it being a disqualification [although Josh took the fall]). He was fired by Jim Herd in September 1991 for refusing to put over P.N. News.

Gang did return to WCW in 1995. He became a member of Sullivan's "Dungeon of Doom" and lasted only a few months, but did hold the WCW United States Heavyweight Championship one time. He defeated Kensuke Sasaki for the title and dropped it to Konnan on his way out.

In 1992, Gray appeared in the movie Stay Tuned.

One Man Gang (left) and Smash at Chikara's King of Trios 2008.
One Man Gang wrestled in a dark match against Flash Flanagan prior to the February 3, 1998 Raw is War taping but was not hired. Also in 1998, One Man Gang briefly joined Extreme Championship Wrestling, including appearing at their flagship event, November to Remember. Gray made another appearance in the WWF in 2001 for the gimmick battle royal at WrestleMania X-Seven as One Man Gang. In 2001 he also worked for the World Wrestling Council in Puerto Rico where he won the World Wrestling Council Hardcore Title and feuded with Abdullah The Butcher and Carlos Colon.

In later years, Gray lost a lot of weight following a heart attack in 2000. He works as a prison guard at the Louisiana State Penitentiary. Although Gray is no longer performing on a regular basis, he occasionally makes appearances on the independent wrestling circuit, including an appearance at Chikara's King Of Trios 2008, teaming with Demolition, where they lost to the Fabulous Three of Larry Sweeney, Mitch Ryder, and Shayne Hawke On March 28, 2009. Gray returned after a lengthy absence from the ring at an International Wrestling Cartel event. He was defeated by Jim Duggan in the main event.